This page is to promote Quambatook, situated in Northern Victoria Australia

I will put many photos from around the town on this site .

Here are a few photos, a photo album will be put on soon.

(Please Note some links may not work for a few days) 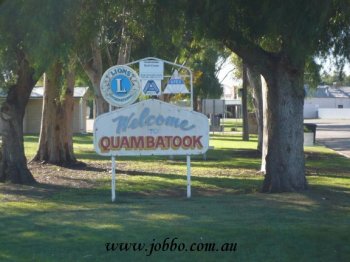 Feel free to print off any photo

Links to other Quambatook Clubs and Businesses

He lost his short but very courageous fight, Wayne was a very hard worker building a business that had branches in other towns, first known as Quambatook Rural Supplies then with a total of 7 branches, it became North West AG Services, over the last 20 years Wayne and business partner Mike Hind have given excellent service to the farming community.

Wayne had a big connection with the Quambatook Tractor Pullers Association, His business was a major sponsor of the Australian Championships for many years, also if you have ever visited the complex at Quambatook, you will remember the very good security fencing at that complex. When the complex was built Wayne was contracted to erect all the fencing, anyone who knew him would have known it would be an excellent job, this was the result.

Wayne would always greet you with a big grin, he was one of the most energetic person you could meet, great supporter of the Quamby footy club, and had been a successful player for them in his younger days. Cammy as he was know, has been a big part of Quambatook along with John Parker they will be sadly missed. our town has lost two great towns people in just over 2 weeks. Wayne was laid to rest at the Quambatook Lawn cemetery 24th May 2007.

I would like to express my sympathy to Judy and families. Kelvin

John Parker the founding President of the Australian Tractor Pullers Association, has died from injuries received in a tragic accident. John was life member of the ATPA and the Quambatook Tractor Pullers Assocn. He owned the Quamby Quaker and the T&I Terminator and was planning a NH pro stocker. Some in the US may remember meeting John, he had made many trips to the US and attended many pulls. I accompanied him on one trip in 93, to pulls at Macon and Bowling Green.

John had just founded the Quambatook Heritage Working Machinery Association and was the founding President, he was trying to preserve our cereal growing machinery before it was all lost to the scrap yards. I worked for John for 12 years but first started traveling to ATPA meeting as far back as 82, and at one time served as Vice president to him while he was President of the Australian Tractor Pullers Association, where he serves 4 terms. John was still serving as a member of the finance commitee, We cannot understand what effect his death will have on our sport. He was the Major sponsor of our Australian Championships, with his Machinery dealership T&I Centres along with New Holland they have carried naming rights to the National event for some time. Today's funeral saw the procession travel through the Pulling complex which he was the major instigator of it being built, there was a avenue of vintage machinery which he had purchased and donated to the Association, along with his beloved Quamby Quaker and the T&I Terminator. John was a visionary and always happy to give anyone a helping hand. I think a little photo I took of him a couple of years ago and I had put the a couple of words on the photo would best describe John. Tractor Pulling in Australia will never be the same. I hope everyone will get together and build it to a greater status in honor of John, this would be a fitting tribute to a great man.
We will miss him so much, Kelvin